Posts Tagged Two Of A Kind

Posted by knutskjaerven in Sessions, Street Academy on August 14, 2012 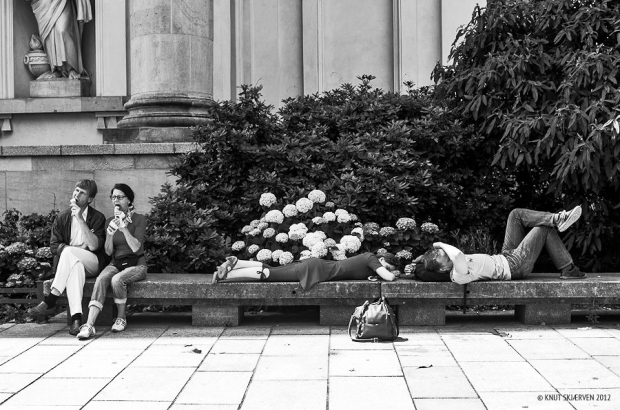 Two Of A Kind. © Knut Skjærven.

Here is a simple one: Go out there and pick two pairs. They have to be rendered within the same frame, of course.

Actually this example contains two different cases. One rather simple, the other one much more complicated. Luck has to be on your side for the last one at least. As it was for me.

The first case is completed when you have found the two pairs and framed them with and in your camera. Make sure that the context is of such a kind that is does not take attention from the two pairs which are the main point in this session. Keep the context neutral.

The two pairs should be held together by a distinctive similarity and visual closeness as they are in this shot. The ice cream eating couple really looks like they are from the same crowd. Look at their gestures, their clothing, there age, their body language.

The same can be said about the other couple relaxing horizontally in the sunshine: Same age, same attitudes, same bodily positions (laying down). But there is no synchrony at work here as with the first couple. The second couple are similar by being opposite. Head to head, the girl on her stomach and the guy on his back.

That was the easy one. Or the easier one.

The more complex task goes like this: Try to shoot two couples that also are part of the same story. You can read this story as a before and after situation. First you eat, then you sleep. If you read the image left to right, as westerners ofter do, that is the story you get. To accomplish that you need all the luck you can get. As I had it in this scene.

Here is the task:

Go shoot two couples where the similarities and closeness are distinct enough to recognise both as couples belonging the same group. Use some of the clues above to accomplish it: clothing, body language, age or find you own way.

That done, try to take another shot where there is a story linking the two couples. Could be a before and after situation. Think of something. You are the photographer.

When you have taken such pictures you should post it/them to the internet and link to your picture as a comment to this session.

Again, what is importent if that you simply memorize this visual concept so that you are ready for it when it turns up in front of your camera. It will. And you have to be a ready to recognize it when it does.

This is the third session posted. If you are keen to play along take a photo based on the brief above, post is to the internet and let your friends comment on your effort. Link to your photo from a comment to this session so that we all can find it.

Have a very good day. 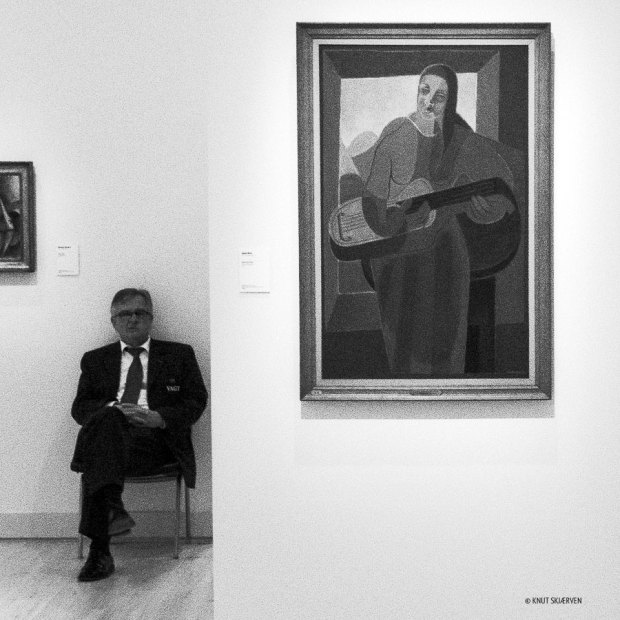 Two Of A Kind. © Knut Skjærven.

One way to create an itchy image is to make a two of a kind shot. Like the one you see here. It is a very simple version.

You get an image of this type when you frame two (or more) similar object in a shot. It has to be objects that are not intended to be isolated or framed together. Such a strange framing is what can make an image itchy. The famous Henri Cartier -Bresson used this little trick in many of his images. He did it well.

Normally shots like this leave an impression of curiosity or  humor. A smile at least.

When I speak of objects I include people, who are normally called subjects. Objects or subjects, in this context, it does not matter. In the shot above we actually have one of each: one live person sitting down, and one kind of similar object in the painting. In addition to have a somewhat similar overall outline of the two. Look at their hands and their faces. Same (roughly) positions of hands and the somewhat same strange expression in their faces. Look at the mouths.

The picture is taken at the Danish National Gallery in Copenhagen. Earlier this year (2012).

You can, of course, also make three of a kind and you can substitute objects with situations or groups of people, which will leave you will more complex images. In this example you get the very simple version. I would say that three of a kind is rather difficult to do. Groups or situations might be easier.

I mentioned that Henri Cartier – Bresson used this technique.  His shot from Athens in 1953 is a good example. Here he combines two groups of a kind: two women upstairs (the decoration of the house), and two women downstair (passing on the pavement). Another one is shot in Nepal in 1963 showing a concrete figure with roughly the same outline as a passing woman. Another one yet is taken in Rome in 1951 showing a male hairdresser looking out the window of his shop. He is flanked by a poster of a woman in the other window. There are many more such examples in Cartier – Bresson’s portfolio.

I would say that two of a kind was probably one of Cartier – Bresson’s favorite techniques for creating itchy images.

When you see the shots that I have mentioned you will know what two of a kind is all about. It is that very combination which makes the images mentioned. Two of a kind is an effective way to create an itching image.

Very easy for you to try as well. Good luck with it.